The issue surrounding the design requirements for the handgrip portion of handrails is still a hot issue among many building code agencies. The debate should be “equivalent gripping surface”; however, the focus always shifts to “width.” They argue over which handrails comply and which do not, resulting in what I’ve referred to as “handrail wars.”

Home builders and buyers find themselves in the middle of this conflict which began in California where the restriction on handrail usage in residential construction has become overly regulated. As a result, some of the most common and traditional handrails used since the 1800’s have been denied usage or eliminated as a design choice.

I found myself in the middle of this when I was sales manager for Hardwood Creations in the 1980’s. 6210 handrail was a common choice in residential high-end construction. One project (subdivision), after the installation of the stair in the model home, the building inspector rejected the hand as “unsafe”. I met with the chief building official for the city who said that he was simply playing “devils advocate”, and that any petition to keep the existing rails would be denied. Years later that same official was building his own home and had the “dangerous” 6210 installed because it fit the design of his house. Hmmmmm..... I guess he didn’t want to play devil’s advocate here.

George Anchales, in 1992, wrote an article in the September-October, 1992 issue of Building Standards magazine entitled, “An Objective Approach to Equivalent Gripping Surfaces.” Mr. Anchales, then a member of CBO and chief electrical inspector for San Bernardino, Ca., offered the best approach to the interpretation of the code itself.

As a result, many building officials ran with that and said, “Your handrail cannot be more than 2 inches wide!” Nonsense!

With the image below, Mr. Anchales offered a simple solution. Mr. Anachales stated: “Using this method will help you determin whether handrails are equivalent in grasp ability.” 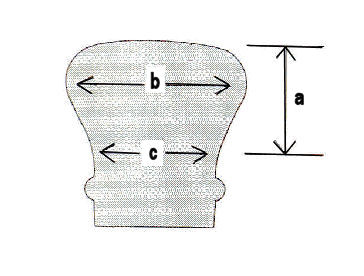 Using this formula, you’ll find that all of the handrails offered by Westfire should fly in your favor, as long as the inspector is open minded. You can always request a handrail sample (we offer rail samples for free) which you can then submit to your local building department for approval.

Also, for your help is an updated pdf file from the Stair Manufacturers Association on all residential code issues, entitled: “A Visual Interpretation of the International Residential Code." click me to download